I ran across this new book on Amazon and thought it was applicable to writing cards.

Description:With additional song evaluations and exercises to help songwriters hone their lyric-writing skills, "Writing Better Lyrics, 2nd Edition" is more comprehensive than ever before. The book features new and expanded chapters covering such topics as: when the use of repetition can be an asset; how to successfully manipulate meter; how to work with a co-writer; how to build on ideas and generate effective titles; and, much, much more.
at May 07, 2010 No comments:

Experience the Stationery Show by Video

Here's a show video clip of what the New York stationery looks like. 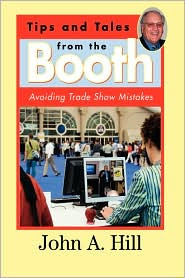 Tips and Tales from the Booth
Avoiding Trade Show Mistakes

How to Design a "Wow!" Trade Show Booth Without Spending a Fortune
Simple tips for your first tradeshow booth.

Build a Better Trade Show Image
Professional recommendations for doing a tradeshow. Advice to take before you attempt one.

Email ThisBlogThis!Share to TwitterShare to FacebookShare to Pinterest
Labels: Videos

FaceBook Group For Artists Trying to Make a Living 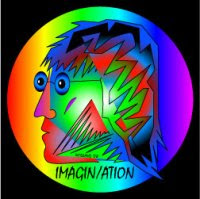 Ran Across this facebook group for "artists trying to make a living creating art."

This group is for anyone or any artist. We are here for those who MAY be struggling to be an artist and trying to make money doing what they love to do. Are you working in a "regular job", just to pay the bills, but feel the need to create art? Please show your artwork here. Please join me and a million others who are striving for professional success with our art.

Hello, I am Sarah Dees, and I've joined Kevin as an administrator at his invitation. I'm a graduate of Parsons School of Design in NYC, with a major in Illustration. I started my first wholesale business, "Dees Design Graphics" in 1983, and was successful for twenty years, creating custom original fine art and designing/producing picture framing.

Email ThisBlogThis!Share to TwitterShare to FacebookShare to Pinterest
Labels: Marketing 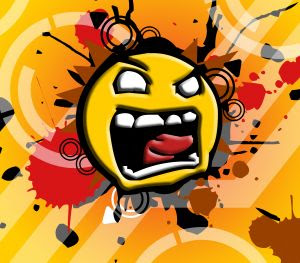 Mike Harnett wrote a humorous piece on funny things that happen at tradeshows. Here's an excerpt:

Bring an umbrella
It was ungodly hot in the Rosemont Convention Center during the ACCI show one summer. The air conditioners in the ceiling were really working hard, and one malfunctioned. Suddenly gallons of water poured out of the ceiling onto a ribbon exhibitor’s booth.When it rains on you inside the convention center, it’s time to go home.

Bring a hard hat
Eventually the INRG cross stitch show moved into the new convention center in Charlotte. A janitor told me when the center first opened there were two conventions, one on each floor. The show on the second floor was for one of those direct-sale companies, such as May Kay Cosmetics. Apparently at one point it became a huge pep rally with hundreds (thousands?) of women jumping up and down. When that happened, the ceiling tiles on the first floor began raining down on the attendees.

Bring boots
Just in case this happens again: I heard about a sewer backing up in an aisle at a trade show, spillage raw sewage onto the show floor.

Bring your putter
The final few old Ben Franklin shows were slow. Really slow. So slow that bored exhibitors created a miniature golf course in the aisles. I never heard who won the tournament.

Email ThisBlogThis!Share to TwitterShare to FacebookShare to Pinterest
Labels: Marketing 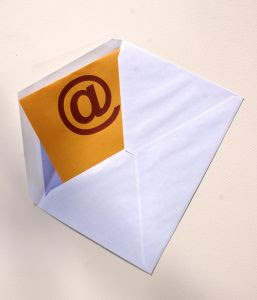 I recommend this article by Tara Reed. Here's an excerpt:

Why I Joined Social Media Sites

I joined because someone said I should. I joined to see what I could do in the internet marketing space. Connect with artists and share my experience in the art licensing industry.

I have connected with some amazing people. Built a community of artists and non-artists I never would have gotten to know, albeit 'cyberly' and not in person in most cases. Although I've met more than a few locally because of the internet as well. 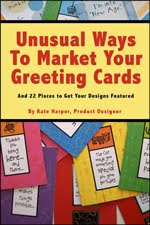 Booklet on Unusual Ways To Market Greeting Cards, and 22 places to get your designs featured. A 20 page booklet on how to get your cards noticed in non-traditional ways. Everything from why you should send cards to your dentist, to how to get special features in national publications. Great tips for designers who are starting out and want to get their cards into the hands of people beyond friends and family. Special Section: Submissions guidelines and contacts for 22 Gift Industry publications and professional gift industry blogs that seek out new greeting card designs to feature for free. (5,000 Words and 17 greeting card images included) 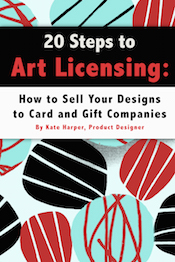 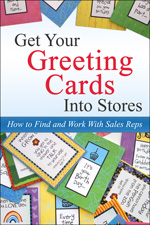 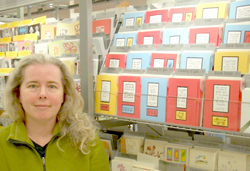